Augmented Reality in the Rail Industry: Benefits and Use Cases 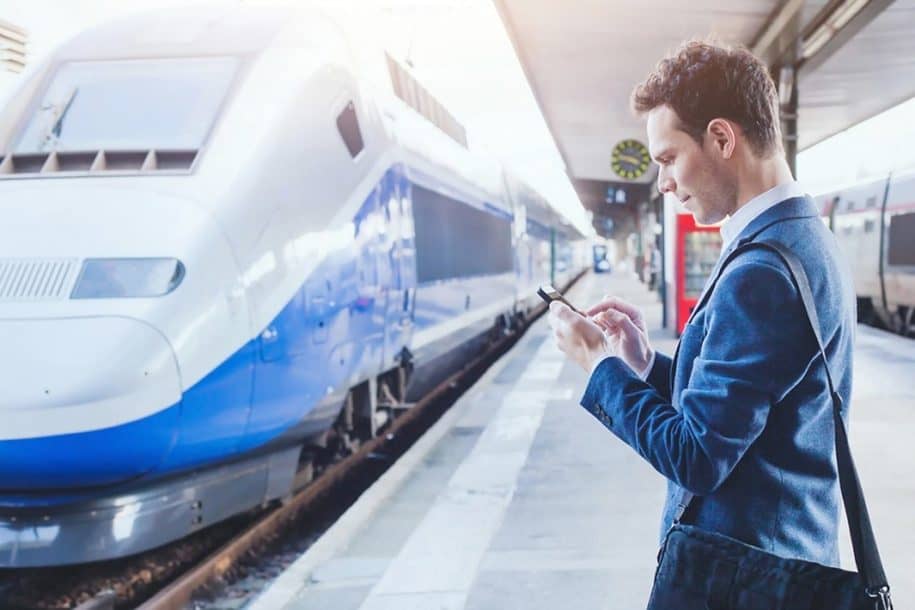 Augmented and Virtual Reality technologies are proving their impressive potential in the Rail Industry, providing a strategic leverage to the digital transformation of this vertical. It is no mystery that AR and VR can support a wide range of industrial activities and processes, but we will focus on specific Rail use cases in this article.

We identified two main application domains for Augmented Reality in the Rail Industry:

1.1) Design and Validation of Infrastructure Projects

One of the most interesting applications of Augmented and Virtual Reality in the Rail field is linked to the design and virtual prototyping of infrastructural assets, such as the renovation or new construction of train stations and railway lines.

In October 2019, the British infrastructure operator Network Rail carried out a project of this type, when it created an app that allows project stakeholders to preview the replacement of the walkways in the stations. The app, called ARki, was designed to allow local communities to preview future infrastructure prior to Network Rail’s launch of a new generation of gangways.

In general Mixed Reality applications in the Rail industry can support building and renovation of infrastructures by providing assistance for processes like Design, Building, Environmental Impact Assessment and Maintenance.

1.2) Management and Maintenance of Railway Stations and Infrastructures

The maintenance of stations and railway infrastructures is certainly one of the sectors in which Augmented Reality technologies can be most useful.

Augmented Reality allows you to remotely control the status of the tracks and railway infrastructure and, when combined with other technologies, including sensors and artificial intelligence, can provide a great deal of support with predictive maintenance.

In the Boston railway network in 2016 the smartglasses supplied to the technical staff were tested to allow them to be connected to the staff in the office and to intervene more quickly in solving problems.

In the United Kingdom, a startup has experimented with a technology capable of predicting faults in the tracks and the infrastructure-train communication system, tracing problems in the field in real time with wearable devices. Similar trials were also carried out in Germany by another startup.

Drones or other rail vehicles can perform a semantic segmentation of lines, vegetation and any other obstacles that could be risk factors for operations.

Through an appropriate extension of a Facility Management platform, it is possible to enter the company’s infrastructures and assets in the registry in order to manage maintenance activities efficiently and quickly, with the aid of Augmented Reality features.

The management of infrastructure safety is back in great relevance with the COVID-19 outbreak, especially in large communication HUBs, such as airports and railway stations.

In the context of an anti-pandemic plan, Rome “Leonardo da Vinci” airport was the first airport in Europe to equip itself with a system based on Smart Helmet for real time detection of travelers’ temperatures.

The COVID-19 pandemic has triggered a series of complications in the management of infrastructure security that AR technologies, in close combination with those of machine learning, allow to manage in an optimal way. For example:

– Temperature control: thanks to thermal cameras or cameras installed on Smart Helmet, together with with computer vision techniques it is possible to detect the temperature of the passengers, identify and retain them for further checks

– Social distancing: the same technologies can be used to detect the distances between people in a given space and to calculate appropriate “safety indicators” accordingly

Except for the effect of the pandemic, the number of rail passengers has been on the rise worldwide, with traffic peaking near major metropolitan cities. Thanks to the new Computer Vision technologies it is possible to monitor the flow of travelers. It is in fact possible to detect and map the flows of travelers thanks to a variety of artificial vision techniques, that, combined with advanced Augmented Reality interfaces, would allow the flow of travelers to be optimally managed within the railway stations.

In October, the Chinese city of Shanghai, plagued by the critical effects of congestion, tested AR Smart Glasses to facilitate passenger flows ahead of the China International Import Expo. Equipped with cameras that stream commuter traffic directly to a station’s control room, they can help agents quickly identify bottlenecks. The product also helps with security checks, as the glasses offer facial recognition and have built-in speech recognition systems. Following a successful application on a single event, the glasses have now been adopted in various subway systems from Shanghai to Luoyang and Gansu.

AR technologies, in close combination with those of machine learning, make it possible to optimize passenger flows and study the patterns of passenger movements in the station spaces.

In the railway sector, just like many other sectors, AR and VR are making staff training more dynamic, engaging and efficient. The use of this technology for training purposes has increased in recent years as it helps simplify and speed up the learning process.

In the UK, HS2, the new high-speed rail line currently under construction, is using Augmented Reality for staff training processes. During the summer of 2019, the company rolled out immersive AR technology that created a replica of its new London hub, Old Oak Common station. Prior to its opening, staff are using this solution to train on the customer experience, safety and maintenance of the station, which is set to handle 275,000 commuters per day.

In Spain, ADIF, the government-owned company that manages the railway infrastructure, has created a modern training center in Valencia equipped with an immersive room in which the use of Augmented and Virtual Reality is used alongside with traditional training techniques.

In a sector where by definition the staff are geographically dispersed and work in shifts, the idea of ​​in-person training sessions is particularly challenging from an organizational point of view.

With this in mind, Augmented Reality represents the ideal solution, offering the possibility of a step-by-step visual guide, as well as that of the support of a remotely connected expert who sees what the user is working on and can direct him.

With a user base that increasingly uses digital tools to search for entertainment and information, the railway sector today has the opportunity to use immersive technologies to set up a more modern and engaging communication: this can mean giving new life to channels that have already been tested, such as brochures or on-board magazines, but also to consider totally innovative approaches tailored to the type of clients and itinerary.

In recent years, Mixed Reality solutions have been put in place by various players aimed directly at users of railway services in support of a series of use cases.

Almost all companies that provide transport services offer their customers magazines to be consulted on board the vehicles with journalistic and promotional information. The contents of these magazines can be enriched with digital information that can be consulted from your mobile device. Trenitalia implemented such a solution some time ago, albeit in a very light way.

HyperLoop has experimented with immersive touch windows dedicated to the entertainment of travelers, allowing them to simulate an external panorama, but also to take advantage of entertainment and shopping services.

Since a growing number of travelers say they prefer the trip itself to the final destination, as evidenced by a survey conducted by Booking.com in 2018, and since typically these lines are characterized by a theme of high historical, geographical or artistic interest, equipping travelers with a Virtual Reality viewer through which they can immerse themselves in some of the worlds linked to the journey they are making – also in consideration of the long time available to them during the itinerary – can represent a significant added value with interesting monetization possibilities.

The information relevant to a traveler is manifold and concerns that to be acquired before the trip, during the planning phase, and during the trip, when the customer is interested in entertainment services, shopping and information about the trip (eg. delays). There is also an intermediate phase, when the traveler is at the station and needs to locate their carriage, but also to use the services inside the station while waiting, such as lounge and restaurant services.

In the UK, a private company called Trainline has implemented a signage to be activated with a mobile app to display information such as train times and routes. It is a low cost solution compared to digital display boards, therefore to be used in a complementary way.

In 2019, Zurich’s “Zürich Hauptbahnhof” train station launched an app dedicated to travelers with the aim of providing information on timetables and destinations starting from the station itself. The “SBB AR” app allows you to view digital content in space using environmental mapping (using Google ARCore) inside and GPS outside the structure. On Android devices alone, the application has been used by over 10,000 travelers.

In all these cases, immersive technologies help people to retrieve relevant information in a more engaging and in some cases more useful way, see the applications for wayfinding that in complex spaces, such as in very large stations or airports, can add a lot of value for the user.